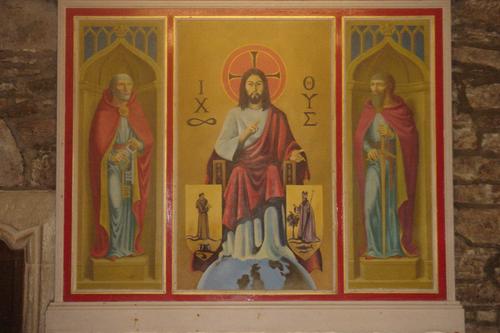 When the ruined chapel was acquired by the Archdiocese in 1948, there was no trace of an altar; whether it had been removed after the Reformation or just did not stand the test of time we do not know. So, when the chapel was restored, a completely new altar with altarpiece and cloth frontal was built and furnished in 15th century style.
The altarpiece is in the form of a triptych, the centre panel showing a representation of Christ Jesus with the side panels showed Saint Peter, holding the keys of the kingdom, and Saint Paul with a sword.  The centre panel has been altered at various times in subsequent years.
The centre panel currently shown was painted in 1990 by local artist and parishioner James Robertson.  The inspiration for the work came from Eastern Church icons of  Christus Pantocrator (Christ, Ruler of All) – a subject which was researched by the artist in collaboration with the then Parish Priest of St Mahew's, Fr George Gillespie, ( Interestingly enough the earliest known icon of the Pantocrator in St Catherine’s Monastery on Mt Sinai was painted in the 6th century when St Mahew was preaching in Cardross). Fr Gillespie provided the following explanation of the painting and its symbolism:
It was a feature of Byzantine Art that each detail had a symbolic purpose, and, in the same way, this painting speaks to the people of St Mahew's today
"The painting represents Jesus as Saviour of all mankind welcoming us to himself, yet includes the reminder that as Lord of all he will also judge the human race.  His hands are outstretched in welcome and as teacher of God's Word.  The imposing majesty of the Lord looks upon us with love and compassion.  That his love for his people is a personal relationship is represented by his foot touching the land of St Mahew."
The colours gold, blue and red represent majesty, royalty and divinity in Byzantine art.
The halo represents the Trinity of God.
Around the figure of the Lord are the letters ΙΧΘΥΣ, the Greek word for "fish", which was used as a religious symbol by early Christians as an acronym for  Ιησους  Χριστος  Θεου Υιος  Σωτηρ, meaning "Jesus Christ, God's Son, Saviour".
At the foot of the throne are representations of St Mahew and St Mungo, patrons of our parish and diocese ; near contemporaries, both preaching on the banks of the Clyde in the early 6th century.(though Mahew probably came first)
St Mahew is symbolised by dolmen or standing stones (one of which, bearing a Christian cross, stands in the porch);
St Mungo, also known as St. Kentigern, is shown with a tree, bird, bell and fish, symbols which illustrate incidents in his life All four symbols are represented in the civic coat of arms and in the medieval and modern seals of various bishops and archbishops of Glasgow.
The painting was commissioned by a friend of St. Mahew's parish and took seven months to complete.
Scroll to Top