Separating the nave from the chancel (sanctuary) is the original stone chancel arch, which would have supported a wooden chancel screen: such a screen was in fact incorporated into the restored church but was removed at a later date.  The arch itself, on the side facing the nave, has been embellished with monograms of Jesus and Mary - IHS, the first three letters of Jesus' name in Greek, and MC, initials of Mater Christi, (Mother of Christ). 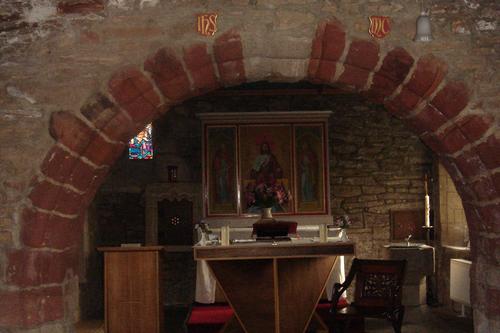 In the East wall to the left of the altar is the original Mediaeval Sacrament House designed for reservation of the Blessed Sacrament.  It has a late Gothic canopy and the monogram J.H.S. - an alternative form of the IHS (shown on the chancel arch).  It is one of the best specimens to have survived in the SW of Scotland and is still in use as the tabernacle housing the Blessed Sacrament today. 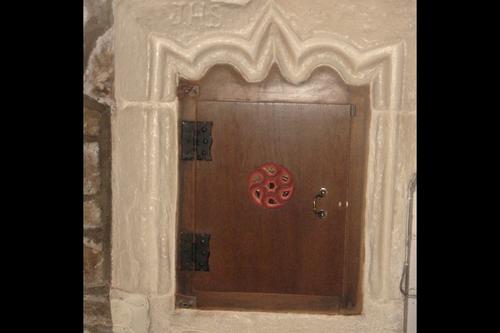 In the east wall, to the right of the altar, is a recess which had probably been a piscine;- a stone basin with a drain for disposing of water, used in washing the sacred vessels.  It is now fitted with a door and used for storing holy oils. 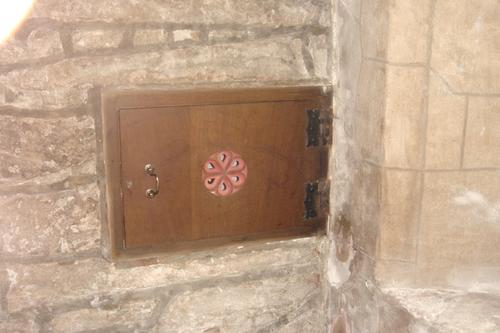 In the north wall there is an arched recess over the tomb of Duncan Napier, founder of the mediaeval church.  This recess, known as the Easter Sepulchre, was a common feature of mediaeval churches and played a central role in the medieval Liturgy of Holy Week and Easter, commemorating the burial and resurrection of Christ.
At the end of the Solemn Liturgy of Good Friday, a consecrated Host and a Cross, wrapped in linen, were ceremonially “buried” in the Sepulchre; candles were burned and a watch was kept continuously until early Easter morning; when the Sacred Host was returned to the High Altar and the Cross was “raised” and carried triumphantly round the church to the singing of the “Easter Proclamation”.
In the simpler form of this liturgy in use today, the Easter Sepulchre is used on Holy Thursday evening as the Altar of Repose. 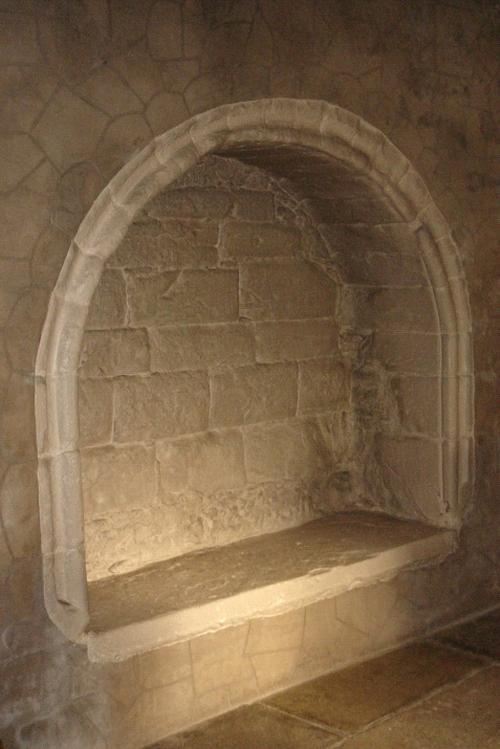 Shortly after the reformation, the chapel ceased to be used for Divine worship. In 1640 a wall was built to separate the nave, which was about to be used as a school room, from the chancel, to be retained by the Napier’s as the family burial vault.  During the restoration work in 1953, when this wall was demolished, the top section of an old font was discovered carefully embedded in the foundations.
This ancient 15th century font, made of stone and square in shape, has been placed on an octagonal stone pedestal and fitted with a circular wooden cover.  Inscribed in gold round the edge of the cover are the words “FONS AQUAE SALIENTIS IN VITAM AETERNAM” (a fountain of water leaping up into eternal life), spoken by Jesus to the Samaritan woman at the well (John 4:14).
The same theme is reflected in the handle - a silver salmon leaping up (from seawater to freshwater to spawn and produce new life).  The fish has a ring in its mouth: this is a symbol of St Mungo, patron saint of Glasgow.  Thus the silver salmon may be interpreted here as a symbol of the new life given to the church of St Mahew in 1955 by the Archdiocese of Glasgow. 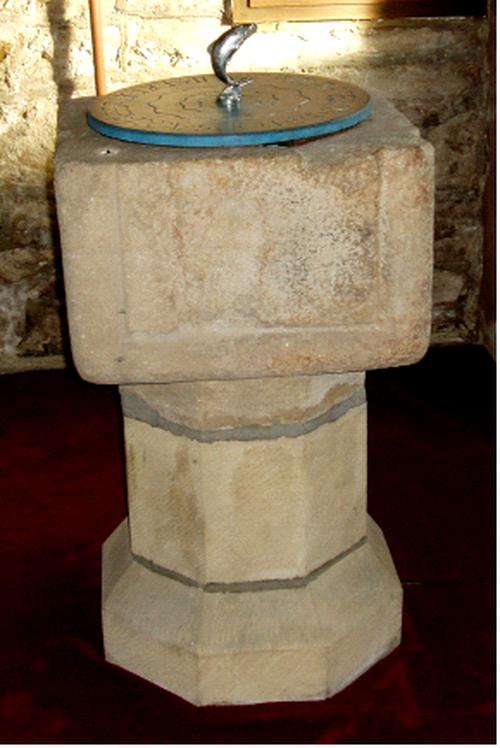