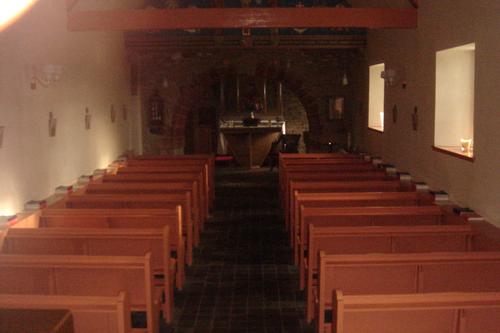 The nave runs from west to east and is a simple construction reached by steps down from the porch.  The present walls were built in 1955 on the foundations of and in the style of the 1467 building.  The main features are indicated as follows.

The Statue of St Margaret

A statue of St Margaret, Queen and Patroness of Scotland stands at the west end of the nave, above the doorway to the porch.  On the supporting beam is a quotation from the book of Ecclesiasticus:

“SICUT SOL ORIENS MUNDO IN ALTISSIMIS DEI SIC MULIERIS BONAE SPECIES IN ORNAMENTUM DOMUS EIUS”
(As the sun rising in the heights of the Lord, so is the beauty of a good wife in her well-ordered home). 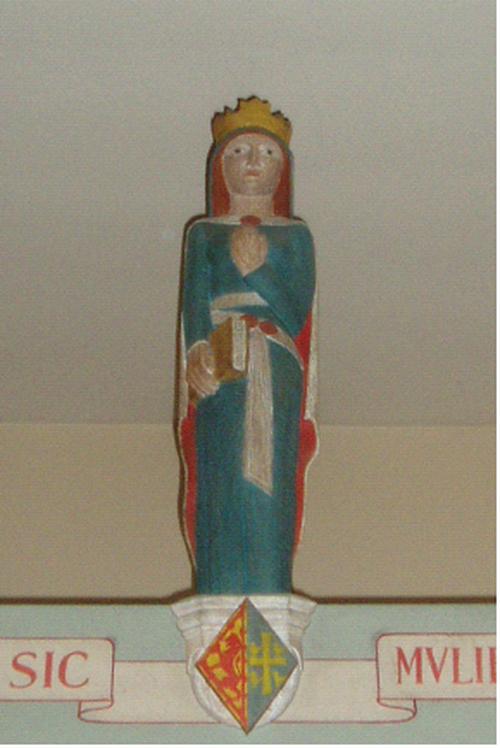 The statue was donated for the restoration of the church by the parishioners of Our Lady and St Margaret's, Glasgow.  It was carved (and signed) by Zelko Kujunzdic, who also executed the fresco of the Baptism of the Lord in the Baptistery.
The design and setting of the statue is totally in keeping with the style of 15th century Scottish church art.  It is a fairly simple wood carving, with an underlying inscription in letters of gold; it adorns an architectural feature of the building (the partition separating nave and porch) and balances the embellished Rood Loft at the other end of the nave.
St Margaret, a descendant of the royal houses of England and Hungary, was born in Hungary about 1045.  In 1070 she married Malcolm III, King of Scotland: this marriage was to prove a singularly happy match not only for Malcolm and his people but for the whole future of Scotland.  She had a great influence on the religious and cultural life of her people, and was noted for works of mercy; her private life was given to constant prayer.
The statue shows the Queen holding a book.  Legend has it that this, her favourite book of the Gospels, which Malcolm had adorned for her with jewels, was accidentally dropped into a river by a servant while travelling, and, miraculously, was recovered unharmed. (The book still survives in a Museum in Oxford.)
Margaret died on 16th November 1093, just three days after Malcolm and her eldest son.  She was buried in Dunfermline Abbey and her shrine can be seen there to this day.  She was canonised by Pope Innocent IV In 1249.  Her feast is celebrated each year on 16th November.
Margaret and Malcolm had a family of 6 sons and 3 daughters. Three of their sons became kings of Scotland, and a daughter married Henry 1 of England.  Eight generations later, a direct descendant, King David II of Scotland, would grant a royal charter to William Napier, giving him “the half-lands of Kilmahew where the chapel is situated”.  After another hundred years a descendant of William Napier, Duncan, would build the original of the church which St Margaret's statue now adorns.

At the east end of the nave above the Chancel Arch is the reconstructed Rood Loft, displaying the Great Rood (an Anglo Saxon word for Cross):  this  was a prominent feature of many European Christian churches of the Middle Ages.  It shows the crucified Jesus, with a crown of thorns, his hands nailed through the palms, a single nail through his feet, and a wound just below the rib where he was pierced with a spear; above his head the inscription INRI stands for Jesus of Nazareth King of the Jews.  Over the cross the Manus Dei, Hand of God, emerges from a cloud - a symbol of God the Father extending his hand downwards towards his Beloved Son.  At the foot of the cross stand his mother Mary and the beloved disciple (holding a book to identify him as John the Evangelist).  Pictures of the sun and moon represent the sudden transition from light to darkness from the 6th hour till the 9th hour when Jesus died.
In addition the Rood Loft portrays the history of the building from its foundation in 1467 to its restoration in 1955.  Immediately under the Cross is the Coat of Arms of the Founder, Duncan Napier, (the  3 crescents indicate 3 visits to the Holy Land);  this same coat of arms would have been in the original chapel, somewhere in the nave.  To the left of the Cross the coats of arms of Pope Paul II, Bishop Muirhead of Glasgow and Bishop Lauder of Argyll commemorate the consecration in 1467 while those on the right,  of Pope Pius XII,  Archbishop Campbell of Glasgow and Bishop Grant of Argyll and the Isles bear witness to the restoration  in 1955.
The inscription at the foot of the Rood Loft reads:
HANC PERANTIQUAM SANCTI MACCAEI ECCLESIAM VETUSTATE  DIRUTAM DONALDUS ARCHIEP. GLASGUEN. RESTAURANDAM CURAVIT PIEQUE EXORNAVIT A.D. MCMLV.
(Donald, Archbishop of Glasgow, caused this venerable church of St Mahew to be restored, after it had fallen into ruin in the passing of years, and piously he embellished it, in the year of Our Lord, 1955).

In the loft space above the sanctuary, and accessed through the floor of the rood loft, is the Chaplain's Chamber where the priest lived in the Middle Ages.  This is a fairly spacious room, with a small window to the east overlooking the priest's glebe.  In mediaeval times there would have been a stone stairway to the Chamber from the entrance to the chancel, probably from the outside.  Since the restoration, access has been by Slingsby ladder and the room is not normally open to visitors.
Scroll to Top