From earliest times it has been a common practice to build churches with the altar on the east wall so that worshippers face the rising sun; a window in the east wall often portrayed an image expressing hope.  In St Mahew's the restored east window, designed and made by stained glass artist Nina Davidson of Eaglesham,  shows an image of Mary as Queen and Mother tenderly holding the child Jesus, with a prayer “O Mater Dei, Memento Mei” (Mother of God, Remember Me).  This window is seen in its true magnificence when the morning sun shines through, reflecting the colours of the stained glass onto the stonework. 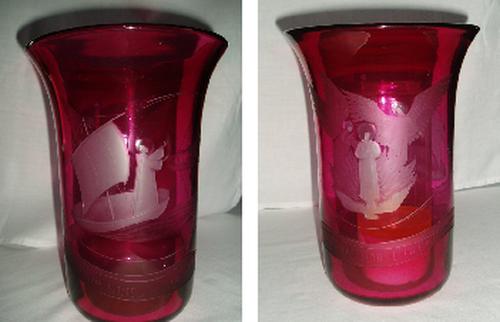 The modern lamp, delicately engraved in crystal, in marked contrast to the ancient Tabernacle, intricately sculpted in stone,  was engraved by the internationally recognised glass artist Alison Kinnaird of Temple, Midlothian.
Engraved on one side of the lamp is an image of St Mahew as a missionary monk sailing in a coracle; with arms outstretched he gazes to the heavens; the words of the first line of the hymn “I feel the winds of God today” are etched on the glass below. On the other side the hymn continues “Today my soul I lift”, and there is engraved another missionary, who can be identified by the dove at his feet as St Columba.  The engraving shows a portrait of the saint with hands joined in prayer, surrounded by angels - an image of St. Columba familiar from his earliest surviving biography by St Adamnan, 9th Abbot of Iona.
Why was an image of St Columba chosen to adorn the lamp?  The answer may be found in the preface to Adamnan's "Life of Columba", where he says that the birth of Columba was prophesied by "a stranger of British race, a holy man and a disciple of the holy Bishop Patrick, named Mauchte." According to Fr David McRoberts, historian of St Mahew's, this Mauchte may be identified as our own Mahew!
A significant part of the opening ceremonies of the church in 1467 and again in 1955 would have been the lighting of the Sanctuary Lamp. In 1997 the new lamp was ceremoniously lit by Colonel John Hawkins Napier III, a direct descendant of Duncan Napier who built the mediaeval church. His contribution has been discretely incorporated in the design of the lamp by the inclusion, at each end of the hymn lines, of symbols from the Napier Coat of Arms (which can be seen under the crucifix on the Rood Loft).
Scroll to Top