The Porch was built in 1955 as an addition to the old building. Inside it contains a number of interesting features. 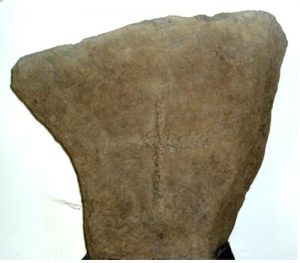 It was a custom of early missionary monks to mark the site of a Christian foundation with the symbol of the Cross carved on a stone: if the site was an earlier pagan sanctuary the cross would be incised on a pagan standing stone.
Early in 1955, during the work of restoring the church, such a stone was found buried outside the north wall of the nave.  A section of it was broken off, presumably during digging, but the large rough cross carved on the front placed it immediately in the category of known stones.
The stone, set into a modern timber stand which conceals its broken foot, is displayed in the porch. It is probably the top part of an ancient standing stone, from the 5th century or earlier, which has been carved in the 6th century with a cross, possibly by St Mahew himself. It is the oldest relic in the Church and is now known as the Cross of Saint Mahew.

Lying at the foot of the above monument and discovered at the same time and place, is another piece of stone: this relic,with “a fine Celtic design carved on the end”   has been identified as belonging to a later period  - the 9th or 10th century  - and is thought to be part of a kerb round a grave or enclosed shrine. (It is interesting to note that two other stones, which may have been associated with it, were discovered in 1955, and recorded in 1978, but their present location is unknown).
Another possibility is that the fragment was originally one end of a rectangular slab which formed the top of a raised tomb or shrine, a type of monument known all over the Celtic world.  It is an elaborate example of the type: the interlace and knot suggest a date in the early ninth century.

A tombstone found at the west end of the chapel inscribed “Dorothy Buchanan, died July 21 1746” is now embedded in the floor. 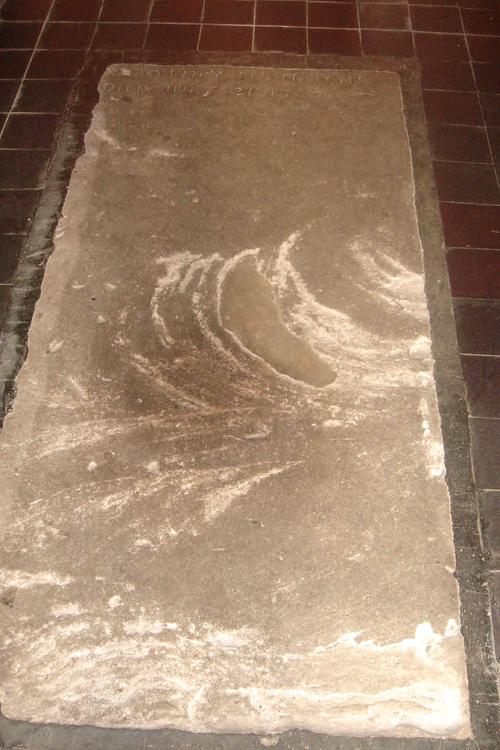 It was the custom in medieval churches to have the baptismal font near the back door to symbolise entry to Christian life. For this reason, when the church was restored, a section of the newly-built porch was partitioned off for use as a Baptistery. The medieval font was re-erected and a renowned Yugoslavian artist, Zelco Kujundzic, then working in Edinburgh, was commissioned to paint a mural of "The Baptism of Christ" in the Baptistery.
The painting, in traditional style, portrays the Gospel story of the Baptism of Christ in the River Jordan by John the Baptist, with the Holy Spirit descending in the form of a dove.
Jesus is shown wearing a loincloth and standing up to his knees in the river; his crossed arms indicate his humility in voluntarily submitting himself to the baptism of John.  John, dressed in a camel skin, is holding a tall narrow cross, the symbol of a preacher. John baptises Jesus by pouring water over his head from a shell: a shell is a symbol of pilgrimage, and here may represent the pilgrimage through Christian life which starts with the Sacrament of Baptism.
The artist's signature and the date, 1958, can be read at the top right of the painting.
The painting was restored in 2010 by artists working for the Conservation Centre of Historic Scotland 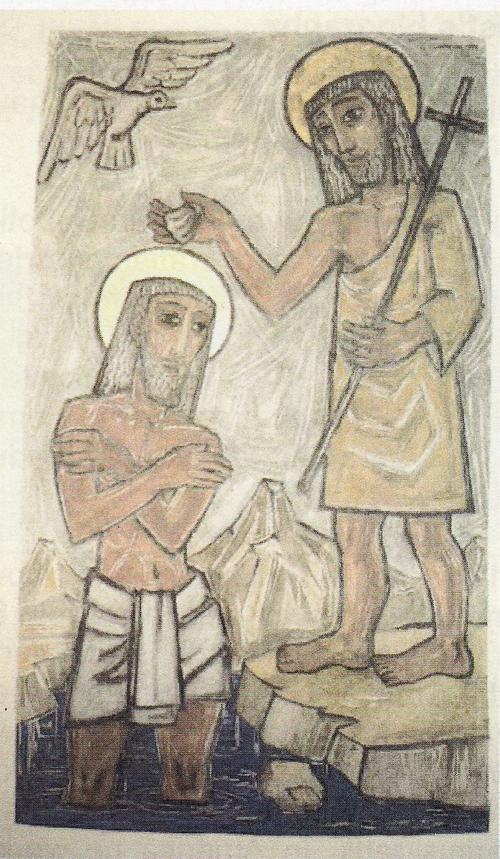 The font was later removed to the Sanctuary as part of the new rite of Baptism.
Scroll to Top