The History of St Mahew's Chapel

When the Roman armies pushed their way through Europe right up to the river Clyde they brought the first glimmering of Christianity to our country. The custom and traditions of the Celtic people and the mysterious circles of standing stones were well known to them.

After the Romans withdrew it was the Celtic Missionaries who spread Christianity throughout the land.

The history books, which tell us the names of the great saints who brought the Gospel of Christ to these northern lands often give the impression that instantaneous and universal success followed the efforts of these apostles. The century or two of strenuous labour by which the disciples of these earliest apostles consolidated the work of bringing Christianity into every corner of the land and weeding out forever the stubborn pagan customs and belie􀀁. is generally forgotten.

Along the west coast of Scotland, this task of building up a Christian people was largely the work of missionary monks from the great monasteries of Ireland and Scotland. The frail coracles of these monks plied the western seas from Brittany to the Shetland Isles and dotted along our coasts are the tiny settlements from which their influence permeated each clan and district.
Nowadays, these centres of early Christianity are often forgotten. A place-name keeps alive their memory and perhaps a primitive standing stone carved with the distinctive interlaced pattern and the Cross of Christ speaks of the ancient sanctity of the place. These settlements or Cills of the Celtic monks had an apostolic simplicity about them. Alongside a graveyard consecrated for Christian burial stood an oratory, build of wood or dry-stone, where the Sacrifice of the Mass was offered. There was a hut where the monk dwelt and a stone, carved with the Cross, which proclaimed the faith of Christ.

In Strathclyde Kirkton of Kilmahew was just such a centre of missionary enterprise. The title of the site, Kilmahew (which name has long since been extended to the whole surrounding district) tells us that the place was a Cill, or church, founded by St. Mahew. 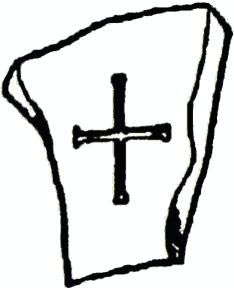 The various small kingdoms of the west coast were ravaged by the Vikings and the Normans but the Cill of St. Mahew remained a holy place to the people of the whole neighbourhood. As generation followed generation, the little church was repaired and replaced, time and again, and men sought the privilege of burial in the holy ground beside it. There is direct evidence that the site was in use as a burial ground from at least the 9th century. Fragments of these ancient tombs, one of them carved with a Celtic interlaced pattern so characteristic of the monuments of our distant forefathers, have been found on site. One is pictured below. It is likely to have formed part of the top slab of a raised tomb.

However, the individual Kingdoms of Scotland were eventually united under Kenneth McAlpine to form one Scottish nation and the Celtic Church was gradually aligned with the rest of Christianity under the influence of St Margaret and King David the First.

The earliest surviving documents which actually speak of the chapel of Kilmahew are two charters of the reign of Kind David II (1329-1370). In one of these, King David grants to Roger Cochran the lands of Kilmahew "with the chapel thereof'. Sometime later, William Napier, whose family had been established in the district for about a century, obtained from King David II the halflands of Kilmahew, "where the chapel is situated".

The chapel of Kilmahew was apparently an important landmark of the district in the early Middle Ages and, that being the case, it is not too fanciful to suggest that the great hero-king of Scots, Robert the Bruce attended Mass in Kilmahew Chapel during those years when he lived in retirement at Cardross Castle, remembering the men who fell at Bannockburn or praying for the welfare of the Scottish nation.

During the later Middle Ages the people who dwelt on Napier's land at Kilmahew were badly served under the mediaeval parochial system of Scotland. They were right on the boundary of Car dross Parish, the parish church of which was about three miles away. The next neighbouring parish church, that of Rosneath, lay some seven miles away across the waters of the Gareloch. 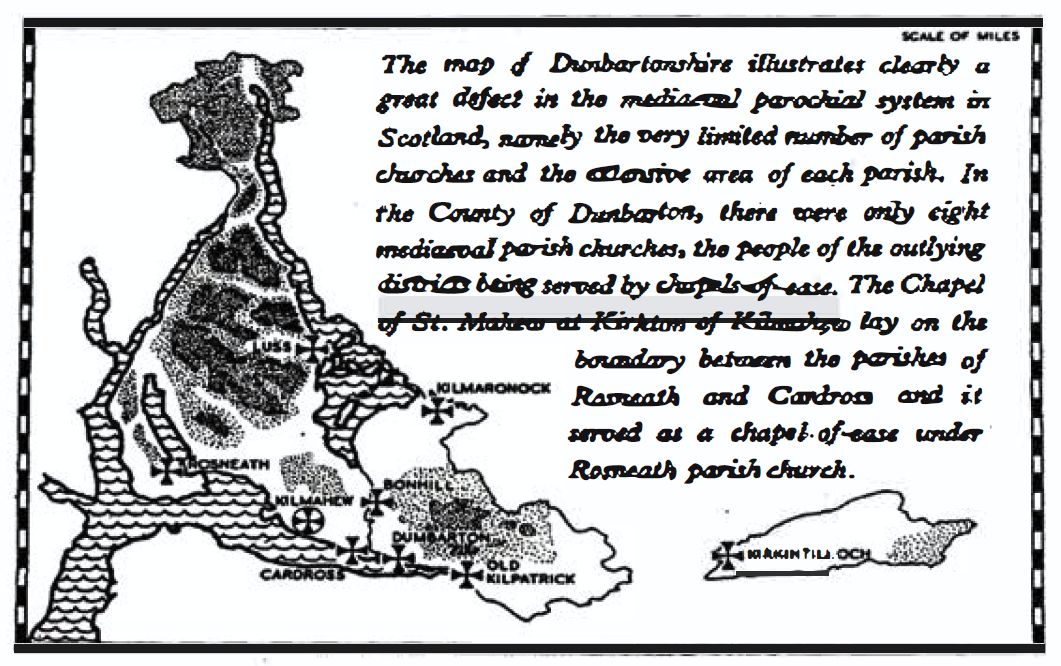 It was common for "every wee laird" (infimus quisque dominus) to maintain a chapel-of-ease for the spiritual welfare of his own people because they lived at too great a distance from the mother-church of the parish. This was the situation at Kilmahew, where the Napier family maintained the old chapel of Kirkton as a chapel­-of-ease, under Rosneath parish church, for the benefit of the people of the district.

Early in the reign of King James Ill, Duncan Napier of Kilmahew decided to rebuild the chapel at Kirkton. This rebuilding was completed in 1467 and it is the ruin of this chapel that has now been restored. The church was endowed with an annual rent of forty shillings and ten pence from certain tenements in Dumbarton.

For a century, the new church was the spiritual home of the people. The history of the chaplains who succeeded one another at Kirkton has been forgotten, except for one incident in 1526 when the vicar of Car dross parish church, William Brunsyd, made a contract with David Graeme, the chaplain of Kilmahew, to exchange their respective appointments "and yis presentatioun to be maid as sone as ye laird of Kilmahew can make the said Sir David fyrme and sikkyr of ye said vicarage of Cardross".

In the mid-sixteenth century, the chaplain living in the priest's chamber at Kirkton Chapel must have given much anxious thought to the religious and political situation. The uncertain course of the Religious War ended, at length, in a Protestant victory and after a time, the sanctuary lamp at Kilmahew flickered out, the priest had gone, the old familiar music of the Mass was silent.

The chapel apparently remained in use under the Protestant regime and there is mention of a Reader named Adam Hutcheson conducting worship at St. Mathew's Chapel in 1574 according to the new manner on behalf of the minister of Rosneath.

The chapel seems to have become derelict in the early seventeenth century and in 1640 Robert Napier of Kilmahew offered to the heritors of the parish the use of the chapel as a parochial school. In this document, which still exists, he gave the use of the nave only and he retained the chancel as the family burial-place. The chancel arch was built up to separate the nave, with its scholars, from the chancel, with its tombs.

The village school remained established in Kirkton Chapel from 1640 to 1846. There were complaints, from time to time, about the ruinous state of the structure and eventually, in 1846, the school was transferred to a new building in the village and the old chapel at Kirkton of Kilmahew was abandoned.

The property was acquired as part of the Kilmahew Estate by the Archdiocese of Glasgow in 1948 and the new owners eventually decided on its complete restoration as a church. The work was begun in 1953 under the direction of Ian G Lindsay and Partners of Edinburgh and was brought to a successful conclusion on the Sunday within the Octave of the Ascension, 22nd May, 1955 when the first Pontifical Mass after a lapse of some four centuries was celebrated in the presence of the Archbishop of Glasgow, the Most Reverend Donald A. Campbell, D.D. 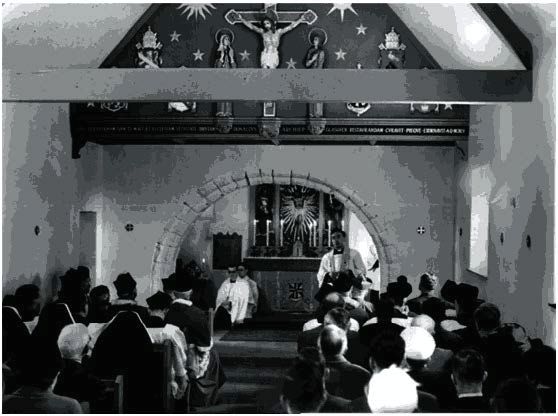 The chapel was initially served by the priests of the nearby Senior Seminary, St Peter's in Car dross. This continued until the transfer of the seminary to Glasgow in 1978.

In November 1978, the first parish priest of the newly established parish of St Mahew's, Cardross, was appointed. His appointment allowed daily Mass and other services to be celebrated in the parish.

O King of Ages bless this house
and keep it free from scaith.
That from this place may shine anew
The peaceful light of faith